For the third, and the last (for now), of my weekly words on contemporary art I’m returning to the paper cut. In this case a most cutting cut. Fair disclosure, the artists Jacqueline Nicolls is a good friend.

In the Ladies Guild Collection, viewable at

Nicolls uses a most conservative form – a paper doily, perhaps the sort of thing one might find under the biscuits at a Shabbat Kiddush. But look closely and the doilies turn out to be made up of a text surrounded by images – shocking texts and shocking images drawn from the Talmud and similar texts that depict women in dark and, frankly offensive ways.

“One cup of wine is becoming to a woman, two are degrading, three she solicits publicly, four she solicits even an ass in the street and cares not.” Ketubot 63a

It’s true – texts like this, and worse, do exist on our tradition. Nicolls however refuses to buckle under them. The carefully cut out designs around the central text are largely of women embodying the worst nightmares of the, presumably, men who spoke these texts. The texts are, in many ways, bullying, unfair, certainly one-sided. The images, coupled with the fragility of the medium – the paper-cut – stand up to the bully and face down the misogyny. The texts reflect the male-only environment from which so much Rabbinic culture emerged. The images ensure that women are very much in mind. No longer a ‘less-seen-the-better’ afterthought to the central Rabbinic preoccupation with men. It’s a fascinating marriage of form and content and it’s a brave critique of andocentric Rabbinic culture that could only be made from a place of knowledge and understanding.

Posted by Rabbi Jeremy Gordon at 17:32 No comments:

At first glance Nes’s portrait of Joseph (whose birth is recorded in this week’s Torah reading) feels wrong. The child is too young.

You can see it here

Please click through, it’s hard to explain just in words.

As readers of Torah, our collective memories of Joseph properly begin with his dream stories (stories we don’t come to for a couple of weeks). He seems arrogant, tactless, almost goading his brothers with dreams of his greatness. But in Nes’s photograph the boasts are revealed as nothing more than the bravado of a little boy who has lost his mummy. The glorious ‘coat of many colours’ is revealed as the sort of shirt one can buy in the markets of the Middle East. There is certainly a Middle Eastern quality to the photograph, but after that it’s difficult to pin down. I presume the child is Jewish, but he could be an Arab. The street behind him is indistinct and blurred. It could be a beautiful Galilean Moshav, or some godforsaken refugee camp. There is an ‘everyman’ quality to the suffering of this small child, coupled with a certain bravery. He’s prepared to meet our stare but he doesn’t know what it coming. Who does?

When we read these wonderful stories we have the end, perhaps, to easily in mind – Joseph, hero of Egypt, Viceroy over the Nile. But this photograph, and the others in the series, bring a freshness, a challenge and a raw quality that opens up more questions than it answers.

Other photos in the series can be seen at

Posted by Rabbi Jeremy Gordon at 21:57 No comments: 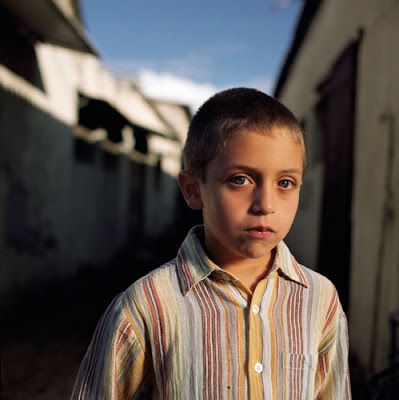 Joseph by Adi Nes. For more http://www.praz-delavallade.com/index.php?site=artists&fromlink=artists&a_id=13&artistname=adi_nes
Posted by Rabbi Jeremy Gordon at 21:34 No comments: