A woman goes to the post office to buy stamps for her Chanukah cards. She

says to the clerk "May I have 50 Chanukah stamps please."

"What denomination?" says the clerk.

Posted by Rabbi Jeremy Gordon at 15:09 No comments:

And I love words, especially the words of our tradition.

But other forms of creativity can sometimes open doors to ideas words alone cannot reach.

Over the next few weeks I want to use this e-mail to look at some contemporary works of art that seem particularly powerful for a Jewish community like ours, or at least for a Rabbi like me beginning with Transparent God by the Christian Danish papercut artist, Peter Callesen.

Photos of the work are at

Transparent God is constructed from one giant piece of paper and from a distance looks like a large slightly tattered headless human-like form.

As you approach it becomes apparent that the form is made up of a myriad smaller cut-outs of human forms which are held together to create the shape of the human-form.

From directly above the piece you get to look down at the giant piece of paper and see the negative space left as these cut-outs were extracted. The range of cut-outs includes singles, couples, groups, vibrant young things, more sedate gentlefolk and more – a true cross-section of humanity.

This myriad of human forms which make up the God-form is a wonderful meditation on the Biblical verse that suggests humanity is created in the image of God (Gen 1:26). It’s not just one particular human, it’s the mosaic of all of humanity that need to be integrated into a vision – as if such a thing could be possible – of God. It’s not an idol, there is too much deliberately missing, much like a person choosing to write G-d, rather than God. You can’t see God’s face  – as God explains to Moses (Ex 33:20). But there is something to connect to - God’s garb, the Hebrew word would be Levush, as seen by Isaiah (Chapter 6) and featured in a number of Psalms, including the concluding Psalm of the Kabbalat Shabbat service – 113. And God’s hands – the outsretched arms of Exodus 6:6.

The human forms are two dimensional, simple paper-cuts. The God-form is three dimensional. We are being asked to imagine God existing in an extra dimension above human perception. If we exist in three or four, then God exists in five dimensions, or more.

But perhaps the most striking element of the God-form is its fragility, a fragility encapsulated by the title of the work – Transparent God. There is pathos and vulnerability in the God-form. It doesn’t tower over its human carpet aloof and full of foreboding. As an image of God it is intimate, delicate, unfinished and all the more provocative for that.

Posted by Rabbi Jeremy Gordon at 20:11 No comments: 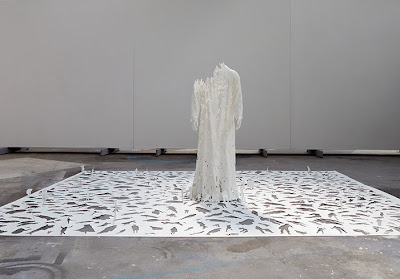 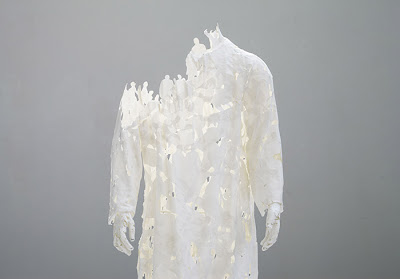 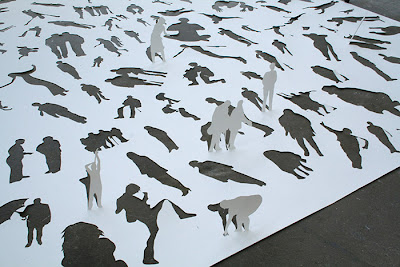 Copy to follow For more of Peter Callesen's works go to http://petercallesen.com
Posted by Rabbi Jeremy Gordon at 17:27 No comments:

You mean you haven’t heard about ‘Old Jews Telling Jokes’ yet?

It’s a You Tube hit and BBC4 have begun to serialise half hour programmes.

(but beware, some of the jokes and much of the language is hardly rabbinically appropriate)

Of course Jews aren’t alone in being proud of our ethnic humour but … well I think Jewish humour is pretty special. Remarkable among the sub-genres of the Jewish joke is the joke where the Jew triumphs over adversary. Many are the jokes told at the expense of Polish guards and others who, at various times, have presented all too real physical threats. Perhaps the secret of Jewish humour lies in the ability to find an area in which the Jew can triumph. We may be attacked, in the ‘real’ world. But in the world of humour we can find a way to triumph and defeat, or at the very least, cheat an uncomforting fate. Humour cannot change outcomes, but it can lighten our tread and lift up our hearts. Actually that reminds me of a story.

Posted by Rabbi Jeremy Gordon at 22:38 No comments: